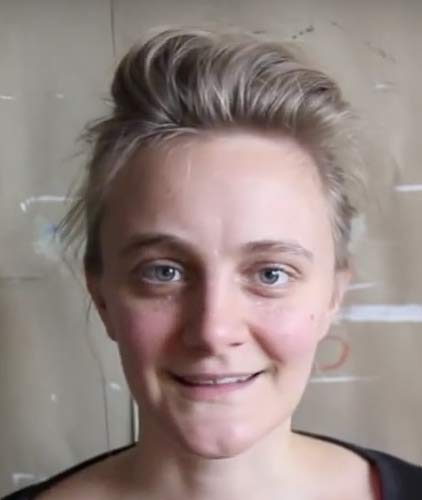 Gwenn Liberty Seemel is an intriguing name.  Her American and obviously patriotic father thought he would call his daughter Liberty Bell Seemel, after the iconic Philadelphian chimer.

Her mother pointed out that he had dropped a clanger as the wonderful bell was cracked.

They needed to compromise and so Gwenn was added, the bell took its toll and Gwenn Liberty  Seemel has a nice ring to it anyway.

Gwenn’s family are from Bubry in the  Morbihan region of france, which is where they make the best crêpes according to Gwenn.

Bubry is a tiny and beautiful village in a very picturesque are of North East France.  She  has been a professional Artist since graduating in Portland, Oregon in 2003. She now lives and works in Long Beach Island, New Jersey.

When I first looked at her painting style it struck me how there was a lot going on in terms of detail, line and color. After delving deeper there is an interesting explanation for this vivid and ‘myriadic’ style.

You can see it clearly in the example above.  A kaleidoscope of wonderfully orchestrated patterns and colors.  Simple in basic composition but made so interesting with shapes, cross hatching and contrasts. Ingenious in execution.

Gwenn, like many artists started out with a style that was influenced by one of the greats.  Her style has had many twists and turns over two decades but her philosophy for artistic evolution is simple:

‘Sometimes finding your way as an artist is a question of looking around at what others are doing and sometimes it’s a matter of being open to whatever life throws at you, but, mostly, the way to evolve is just to keep at it’

And keeping at it she has!

It all began at the tender age of 14 with a ‘counterfeit’ Van Goch classic.  It was the atmospheric  ‘A Starry Night’ which he painted in June 1889 from the window of his his asylum room at Saint-Rimy-De-Provence.  Nearly 100 years later Gwenn rebranded the painting with her acrylic version on wooden panel – ‘My Starry Night’. Pretty impressive for such a young artist.

Van Goch’s influence stayed with her and another game changer came in 1995 with intaglio printmaking which involves plenty of cross hatching. Intaglio printing is currently used for the production of banknotes and passports.

Gwen was influenced by the artist  Arnold Mesches after studying his  style of cross hatching.

Her brush stokes became looser and wider and as she tried out new brushes some areas of her work evolved into blocks of color.

Following a series thumb injury in 2009 Gwenn developed a temporary fix while the damage healed.  She started pushing watered down paint around the canvas and when the injury had passed she kept some of this ‘accidental style’.

After 2011 Gwenn took a liking to painting on wood as it enhanced her style, picking out all the detail and turning her into an even bigger doodler than before.  All these influences have influenced the style she has today.  Very detailed, extremely vibrant and full of character.

Now in her mid thirties there is still plenty of time for Gwenn to fine tune her style further.  It will be interesting to watch!

Gwenn paints individual and group portraits which fit perfectly with her style.  Not only does she paint with a wonderful technique but has the greatest skill that a portrait artist can possess.  The ability to make personality leap off the canvass.

This is an art in itself that few manage and fewer master.  she is certainly a master of this skill and the comments from those who have commissioned Gwenn’s portraits bear this out.

She also creates ‘YouBags’ – which I must confess is a new one on me!

I have seen cartoony images printed on bags before but never with original artwork like this  ‘Youbags’ are, as the name suggests, bags with you on it – the ultimate designer bag with your portrait.  Fabulous idea! 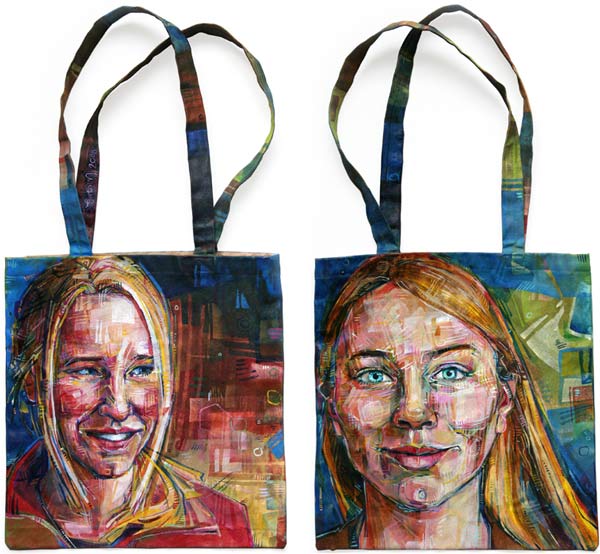 Wildlife is another passion that finds its way frequently onto Gwenns canvasses and she has created some stunning artwork. 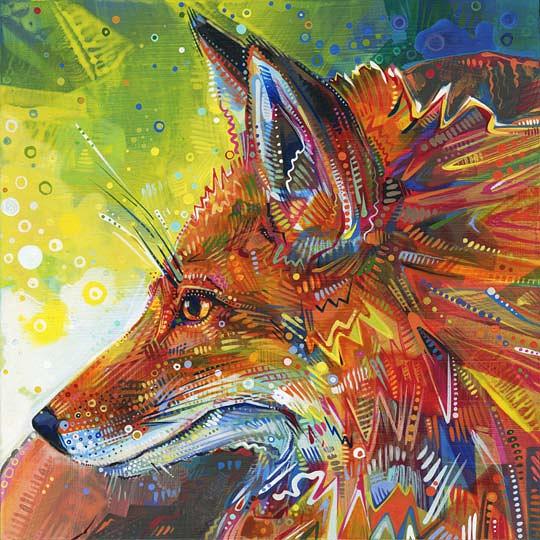 This fox has just about every color you can think of woven into the fur.  Blues, greens, reds, oranges, yellows, blacks, whites and more variations in between than you can shake a pallet knife at.  If you thought of painting a fox with such a broad spectrum of pigments you would surely dismiss the idea.  However I think you will agree that it works spectacularly.  You can also see the trade mark background style with the beautiful blend of  greens.

‘My backgrounds evolve in the same way as the rest of my paintings, by layering and doodling and looking for the energy that I want to capture or express. It’s not an aspect of my work that I’m good at explaining. The best I can do is to say that I got where I am by keeping at it!’ 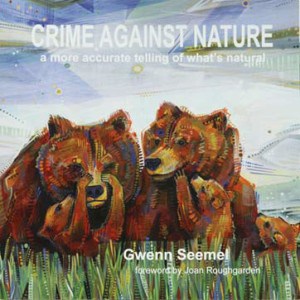 A crime Against Nature

Beautifully detailed, packed with color – Gwenn’s animal paintings are highly desirable artwork.  Gwenn’s quest to see if the natural world could answer our human baby making assumptions led to the production of a children’s book.  The extensive paintings from the natural work feature in the book ‘A crime Against Nature’.  She also uses the storyline and images as part of exhibition material.  You can see a portfolio of her natural world art here…

I also found a video of a wall mural Gwenn produced as a memorial for the street performer and comedian Kirk Reeves. She first painted Kirk in 2007 and the mural is located on NE Grand at Lloyd in Portland, Oregon.

I won’t spoil it for you – it really is well worth watching both for the artwork and the extremely moving story. You can also read about this mural on Gwenns web site here… 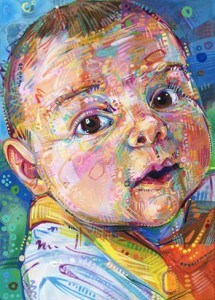 If you like Gwenn Liberty Seemels artwork or would like to commission a portrait or Youbag you can contact her via her website here…
You can also purchase her artwork which she sells directly off here web site here…
*
So what does the future hold for Gwenn?
I recently caught up with Gwenn and asked her about her future art and events:
You have developed your style over a number of years – what hopes, plans and aspirations have you for your art in the future.
I’ve been experimenting with going more towards fully abstract compositions. While I’m not certain I’ll ever be completely satisfied with this sort of work, pushing myself in this direction produces interesting effects in my more representational work.
Have you any events such as exhibitions of your work or presentations in the near future?
I recently published French versions of a couple of my books as well as making the English version of my book about copyright available in hard copy! More information about my books in English: www.gwennseemel.com/books
And in French:
www.gwennseemel.com/livres
Also, I’ll be speaking at the Abundant Artist’s Conference in Portland, Oregon:
https://abundantartistconference.com/
« How to scan A3 images with the Photoshop combine Layers pallete » Table top easels for painting, drawing and sketching